If you’ve ever had the pleasure of driving a classic Pontiac Firebird Trans Am, you know that it’s not your ordinary car — it’s an absolutely stunning vehicle with breathtaking performance and style.

The Pontiac Firebird Trans Am is one of General Motors’ most iconic creations, and through the years, the muscle car solidified a historic legacy with its stylish appeal, powerhouse specifications, and solid handling.

History of the Pontiac Firebird

Before we dive into what makes the Pontiac Firebird so special, it’s important to know about the rich history of this exceptional vehicle. The story of the Pontiac Trans Am began in 1964 — the year the Ford Motor Company released the Mustang. The classic Mustang was a force to be reckoned with because of its sporty performance and practical usage. Ford primarily marketed the innovative vehicle to younger drivers and those wanting more bang for their buck. They immediately hit the jackpot in sales and sold over 100,000 Mustangs within the first six months of the car’s release.

The executives at General Motors, Pontiac’s parent company, knew that they needed to create a new vehicle to compete with Ford’s groundbreaking Mustang. In late 1964, they began development on the F-body, a rear-wheel drive platform for pony cars.

At first, GM planned on only having their Chevrolet division produce a sporty car with an F-body to compete with the Mustang, but in 1966, the behemoth manufacturing company enlisted the services of their Pontiac Motor Division.

When GM first involved Pontiac in their competition with Ford, John DeLorean, acclaimed car designer and general manager of Pontiac, was less than thrilled with the idea of producing a Mustang competitor. He and his staff had worked for almost three years developing and seeking approval on a two-seat sports car with a fiberglass body. GM’s executives didn’t want DeLorean to develop his fiberglass dream because they worried it would negatively impact sales of the Chevrolet Corvette. Instead, GM determined that the best strategy moving forward would be having Pontiac produce a special car with the F platform (F-body).

Before Pontiac created the classic Firebird, Chevrolet developed the first car using GM’s F platform: the Chevrolet Camaro. They unveiled the 1967 model in the fall of 1966 — only six months before Pontiac released the Firebird.

Pontiac only had a brief period to develop the Firebird, so the manufacturer used many of the components of the preceding Camaro, including many of its interior pieces, structural members, and glass. Although the vehicle’s development drew inspiration from the Camaro — even resembling the car’s body with its similar Coke bottle styling — it offered motorists better handling through its more impressive suspension and wider rims and tires. The wide rims and tires also made the vehicle more distinctly styled as a Pontiac, which was known for its “Wide Track” look. 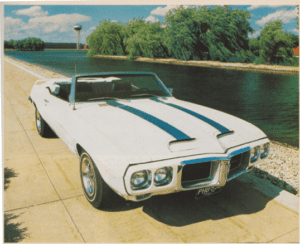 Pictured: Charles F. Adams of Bloomfield Hills, Michigan, owns one of the rarest Trans Ams. Only eight of these convertibles were ever built by Pontiac!

Before Pontiac landed on the label “Firebird,” they workshopped a few different names. John DeLorean floated the idea “Banshee,” which came from a line of Pontiac concept cars, and the manufacturer came up with the name “GM-X.” They came very close to keeping “GM-X” and even created prototype name plates, but Pontiac and GM eventually went with “Firebird.”

Although we now associate “Firebird” with Pontiac’s stunning F-body pony cars, the name predates our remarkable motor subject. In the 1950s and early 1960s, General Motors featured a line of concept cars called General Motors Firebird. GM presented these prototype cars at Motorama auto shows, and they bear almost no resemblance to the Pontiac Firebird.

Although the Pontiac Firebird used some of the parts from the F-body Chevrolet Camaro, it marketed a performance image similar to another breathtaking Pontiac: the GTO. Certain iterations of the Pontiac Firebird had specifications closely resembling the GTO. In fact, the first generation Firebird 400 shared so much of the GTO’s factory speed equipment that automakers referred to it as a “junior Goat.”

According to some automotive experts, the 1969 Pontiac Trans Am was an offshoot of Pontiac’s GTO Judge program. The GTO Judge was basically a marketing ploy constructed by Pontiac to increase sales during a time when there were many competing muscle cars on the market.

Like the GTO Judge, the 1969 Pontiac Trans Am was also a marketing tactic constructed by Pontiac, but the marketing ploy had its roots in racing.

The Pontiac Firebird largely came as a result of race car drivers competing in the Sports Car Club of America (SCCA) Trans Am circuit. GM had discontinued its involvement in racing in 1963, but that didn’t stop retired race car driver and entrepreneur Roger Penske from sponsoring a Chevrolet Camaro team. In 1968, the Camaro team won the SCCA Trans Am circuit with famous driver Mark Donohue, also known as “Captain Nice” and “Dark Monohue.”

The year after Donohue’s win, Terry Godsall, a Canadian industrialist, created a Pontiac Firebird team with driver Jerry Titus. Although the Pontiac team performed excellently with Titus’ driving and help from Pontiac’s engineers, the team finished third after Camaro and their rival Mustang.

The next year, 1970, the Pontiac team started strong, but tragically, Jerry Titus struck a bridge abutment during a race, resulting in fatal injuries. Although his driver had passed away, Godsall continued the 1970 season with two other drivers with poor end-of-season results.

According to Herb Adams, project lead at Pontiac, the car manufacturer actually cut ties with the racing team in the middle of the season because Godsall blamed Pontiac’s engineers for the team’s lack of success. At the end of the season, Godsall disbanded the team.

Although the Firebird didn’t have immense success on the SCCA Trans Am circuit, the special Firebird Trans Am got its name from the racing circuit. GM initially faced copyright issues due to the name, but they ended up compensating the Sports Car Club of America for the name rights by giving them a $5 royalty fee per car.

The 1969 Firebird Trans Am Debut

The Pontiac Firebird made its stunning introduction at the Chicago Auto Show in December 1968 along with the GTO Judge.

Before its debut, the special Firebird underwent an expert, multi-staged development process. In early 1968, Herb Adams and his team had a special project developing a multi-carbureted, six-cylinder engine. One aspect of the project that was peculiar was that Adams focused on the vehicle’s handling, which was atypical in the development of muscle cars. Usually, car developers focus primarily on the straight-line acceleration of the car rather than its handling.

Adams and his team created an OHC-6 Sprint engine with Weber downdraft carburetors, and Adams himself designed a rear-facing intake scoop that became the first Pontiac “shaker,” a feature that came with every succeeding Trans Am.

While Adams worked on this project, John DeLorean was hard at work trying to create a special Firebird. Initially, he wanted to equip the Firebird with a fuel-injected 400 cubic inch displacement V-8 engine created by Jack Brabham. Although they did finish construction on a single unit, they scrapped the idea of mass producing these vehicles because they were expensive to create.

The first Pontiac Trans Ams were created through DeLorean and Adams’ experimentation. In addition to the single Trans Am with the Brabham engine, Pontiac created 25 units intended for the SCCA racing circuit. Pontiac equipped these units with 303 cubic inch displacement Tunnel Port engines.

Oddly enough, these same engines had a higher horsepower when used in the GTOs. The reason for this is likely because GM didn’t want the car to generate more than one hp for every ten pounds of the car’s weight. Pontiac Trans Ams included a steel tab within the Quadrajet carburetor linkage, preventing the secondary barrels from opening all the way.

Like the GTO, the Trans Am came with a robust three-speed manual transmission and rear-end gears, and Pontiac also offered close and wide-ratio four-speed transmissions and a Turbo-Hydramatic.

Legacy of the Pontiac Firebird

With its breathtaking performance and style, the Firebird Trans Am is truly an unforgettable entry in the history of automobiles. Although these vehicles are highly sought after and adored today, Pontiac Firebird sales declined in the late 20th century.

Pontiac halted production on the Firebird Trans Am in 2002 after producing the final Trans Am, which came with a 5.7 liter V-8 with 325 hp.

Although the Pontiac Trans Am is out of production, it lives on in the hearts of motor enthusiasts, and plenty of classic Firebirds are available on used and classic car websites. 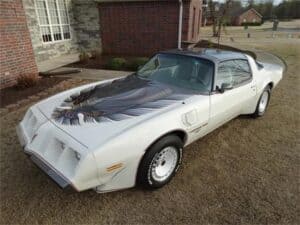 Get Premium Insurance on a Classic Car

If you need car insurance on a pony car, like the 1969 Firebird, or another classic vehicle, you’ve come to the right place. Here at Classic Auto Insurance, we provide our clients with customizable policies perfect for their unique needs. Our policies are one-of-a-kind with special benefits included, such as inflation guard, agreed-upon value, rollover miles, nationwide flatbed towing, and more.

Ready to protect your classic beauty with the best car insurance around? Call our motor experts today at 888-901-1338, or you can click here for an instant quote.