1969 GTO Convertible: A Winning Design with a Few Small Tweaks

General Motors’ subsidiary Pontiac produced many groundbreaking cars throughout its 84 years in business, and they created some of their most iconic vehicles during the 1960s. One of the company’s most imposing and monumental achievements was its second-generation GTO, especially the 1969 convertible GTO.

Here’s a brief history and the specifications of Pontiac’s trailblazing 1969 GTO Convertible.

The Success of Pontiac’s GTO 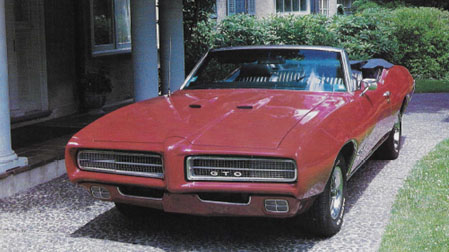 Pontiac introduced their first-generation GTO in 1963, and it was the brainchild of John DeLorean, Bill Collins, and Russ Gee. They designed the car based on the second-generation Pontiac Tempest but equipped the vehicle with a sportier style and performance.

The first-generation GTO boasted an impressive 389 cu in Pontiac V8 engine that came from the Pontiac Grand Prix. The company only sold 32,450 units in its first year, but by 1967, sales increased dramatically — Pontiac sold 96,946 units in 1966 and 81,722 in 1967. The GTO became such a favorite among car enthusiasts that it became unofficially known as the “goat.”

The second-generation 1968 GTO enjoyed even more acclaim. In its first year, the restyled GTO sold 87,684 units and won Motor Trend’s Car of the Year award. Additionally, the car received immense praise from Hot Rod magazine, which stated that the vehicle was the best-balanced Pontiac ever created.

In 1968, Pontiac updated the vehicle with the newly-redesigned A-body, which was curvy and featured a semi-fastback styling. Additionally, the car’s wheelbase was reduced to 112 inches. The car sported three different body-style options: the 2-door convertible, the 2-door hardtop, and the 2-door coupe.

Tweaks on the 1969 GTO Convertible

Due to the 1968 GTO making a huge splash in the automotive world, Pontiac mostly stayed faithful to the second-generation design when creating the 1969 GTO, but they did refine the car into an even more remarkable vehicle. The company updated certain features on the car’s body, including a grille update and restyled tail lights. Additionally, Pontiac added side marker lights and removed the car’s vent windows.

When it came to the GTO, auto enthusiasts wanted more than just style updates — they wanted the vehicle to continue delivering its award-winning performance. Fortunately, Pontiac satisfied motorheads and critics with the car’s standard powertrain that came with an OHV 400 cu in V8 and a three-speed manual transmission. Additionally, the breathtaking car boasted a Hurst shifter, sports suspension, dual exhaust, Wide Oval redline tires, and a heavy-duty clutch.

GTO drivers also had the deluxe steering wheel option and they could choose between bucket or notchback seats.

Although there were many iconic iterations of the 1969 GTO, the most remarkable was arguably the Matador Red 1969 convertible. Pontiac equipped these magnificent cars with Rally II wheels, power steering and brakes, air-conditioning, and a Turbo Hydramatic transmission.

The 1969 GTO’s standard powertrain was remarkable, to say the least, but Pontiac also offered additional desirable powertrain options. Those looking for a more mileage-conscious option could equip their GTO with the 400 cu in 2v mill engine, but, of course, Pontiac offered more powerful options.

The GTO’s standard 400 cu in V8 engine could produce 350 bhp and 5000 rpm, and their two Ram Air induction options boasted even more stunning performances. The RA III produced 366 bhp at 5100 rpm while the RA IV was rated at 370 bhp at 5500 rpm, the most powerful GTO performance at the time.

Part of the reason why the RA IV could display such awe-inspiring capabilities was its innovative camshaft, high-rise aluminum intake manifold, forged pistons, and polished valves. It was truly a sporty force to be reckoned with.

The Decline of the 1969 GTO Convertible

That year, Pontiac sold 72,287 units, but, unfortunately, the car’s decline was right around the corner. The car’s sales dropped significantly in 1970 with only 40,000 units built.

There were a few different reasons for the car’s sudden decline in sales, but one of the primary reasons was the competition. Although the vehicle offered groundbreaking muscle performance, many similar vehicles were on the market by 1970, including Pontiac’s own Firebird.

Get Great Insurance on Your Classic GTO Convertible

Pontiac GTO production declined in the 1970s, but there are still many classic GTOs available for sale in collector car markets. Whether you purchase one of these remarkable vehicles or another classic car, you need premium classic car insurance to protect your investment.

Fortunately, you’re in the right place for robust and affordable classic car insurance. Here at Classic Auto Insurance, we offer customizable policies that are perfectly tailored to our clients’ needs. We also provide many appealing perks with our policies including agreed-upon value, inflation guard, nationwide roadside assistance with flatbed towing, and more.