Throughout its 34 years in business, the American Motors Corporation (AMC) introduced innovative and impressive vehicles, such as the AMX, Rambler, and Javelin. But not every car can be a tremendous success. The manufacturer is also responsible for a vehicle that’s considered by many to be an ugly disappointment — the AMC Marlin. Here’s what you need to know about this notable luxury car.

History of the AMC Marlin 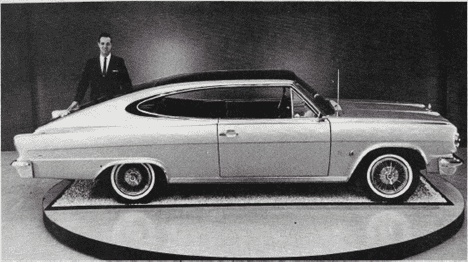 The American Motors Corporation was reasonably successful during the late 1950s and early 1960s, but the company suffered a significant drop in sales in 1964. This drop reflected changing sensibilities amongst the public, who desired a more youth-oriented and performance-based car. In 1964, Ford debuted their iconic Mustang, which captured America’s attention and created the market for pony cars. The Mustang’s success emphasized the public’s desire for performance. The public was bored with AMC’s functional and economic cars, and the executives at AMC knew that they needed to break away from the company’s conservative public image.

This was also a time in which AMC was under new management with Roy Abernethy replacing George Romney in 1962. Abernethy initiated a new line of vehicles intended to address the public’s shifting desires, but he and AMC also wanted to maintain function and economy.

The company’s Vice President of Styling, Dick Teague, got to work crafting a car that would likely catch the eyes of the American public. Teague and his staff concluded that the most desired car body would be a hardtop fastback. The new vehicle was also to serve as an important symbol for AMC shifting to sportier cars. In 1963, Teague impressed AMC management with a clay mockup of the Tarpon, paving the way for the two-door prototype a year later.

AMC debuted the 1964 Rambler Tarpon at the annual meeting of the Society of Automotive Engineers in January 1964, and the car was highly regarded by a crowd of thousands. The company then went on to showcase the prototype at the Chicago Automobile Show.

The Tarpon featured a 106-inch wheelbase and was 180 inches long, and the car boasted an attractive fastback roof that blended with its Rambler body. The car was a success among the viewing public and AMC’s executives, but AMC also wanted to hold onto its reputation for utility. Rather than optimize the car for speed, AMC wanted their new vehicle to be able to accommodate six occupants.

This desire for utility meant that the vehicle wouldn’t compete in the soon-to-emerge pony car market started by the Ford Mustang. Rather than take on Ford head-on, AMC decided to not compete with the Mustang’s market segment. Instead, the company attempted to create its own market section with a sporty car that could seat six.

The company’s goal with the new vehicle would be to symbolize change rather than excel in sales. Unfortunately, the company failed to enthuse the public with its new car.

Dick Teague and his team got to work designing a car that utilized some of the Tarpon’s best features while also offering six seats. The result was an upsized Tarpon with a 112-inch wheelbase and a Rambler Classic chassis.

Executives and creatives at AMC pitched hundreds of different names for their important new vehicle, and the company went with “Marlin” because of its name similarities with “Tarpon.” Sadly, this car was doomed from the start, regardless of its clever name.

The car debuted in 1965 and served as a tremendous disappointment for AMC and motorheads who had adored the Tarpon. Dick Teague even expressed reservations regarding the new vehicle’s design. In Motor Trend, he stated, “There’s a direct relationship between size and the expression of certain automotive styling concepts.” This referenced the fact that AMC attempted to significantly upscale the Tarpon’s design as the Marlin, and this altered the vehicle’s style significantly.

The AMC Marlin’s style was considered a complete failure by many. Malcolm J. Brookes of the Automobile Quarterly stated that the car was the ugliest vehicle produced in Detroit with its blend of sportiness and spaciousness.

Critics and the public were also unimpressed with the vehicle’s specifications with its 232 cu in (3.8 L) I6 2-bbl engine with 155 hp. The car’s engine was certainly reliable, but it didn’t provide a sufficient speed performance for those wanting a sporty, modern car. Drivers could upgrade to a 287 cu in (4.7) or 327 cu in (5.4 L) V8, but these engines still lacked the speed performance most consumers wanted.

Although the car lacked a notable speed performance, it still provided an enjoyable ride to its occupants with its stiff springs, heavy-duty shocks, power disc brakes, and front and rear hydraulic brake systems.

AMC sold an underwhelming 10,327 units in the Marlin’s first year, and sales decreased in the subsequent years. The company produced only 4,547 1966 AMC Marlins and 2,545 units of the 1967 AMC Marlin. The 1966 and 1967 iterations were distinct from the 1965 because they featured rectangular headlight bezels rather than rounded bezels.

With its poor sales and introduction of the more impressive AMX and Javelin, AMC discontinued the Marlin in 1967.

If you’re looking for protective and affordable insurance on your classic AMC vehicle, you’re in the right place. We offer customizable policies that are perfect for the needs of our customers and their stunning classic beauties.