The Birth of Volkswagen Classic Cars

The Volkswagen Beetle is one of the most famous and recognizable cars in history, and it’s no wonder why — the car is affordable and durable, and it also has a memorable, one-of-a-kind style.

This classic vehicle also marked the beginning of the sudden influx of imported cars in the United States. The first Volkswagen Beetle arrived in the US on February 7, 1964, and it quickly became a hit. The import was so popular that Volkswagen constructed a North American manufacturing plant in Puebla, Mexico.

In 1972, the Beetle beat out the Ford Model T as the best-selling car of all time after it sold its 15,007,034th model. The Beetle retained this title until 1974 when it was beaten out by the Toyota Corolla, but Volkswagen continued selling millions of these iconic cars internationally. By the time Volkswagen discontinued the original Beetle, they sold over 21 million models in over 30 countries.

Although everyone loves stylish Volkswagen classic cars, not everyone is aware of their fascinating origin.

The History of Classic Volkswagens in Germany

Although Béla Barényi created the VW Beetle’s original design, Ferdinand Porsche was the main developer of the classic Volkswagen in Germany. In 1931, Porsche worked on developing an economic car that would be widely available to the public. During that time, cars were too expensive for the average person to afford, so only upper-middle class and wealthier individuals bought vehicles.

Porsche believed that offering a less expensive car would tap into a new market, but he struggled to find financial support for his idea. Porsche’s idea of offering the public a more affordable car aligned with some of Adolf Hitler’s goals, who became Chancellor of Germany in 1933. Hitler opened the Berlin Automobile Show that same year, where he discussed his desire for more affordable cars for German citizens.

Hitler also heavily invested in Germany’s automotive infrastructure and built extensive roadways. He then created a plan for more Germans to own cars and enlisted Ferdinand Porsche’s expertise. 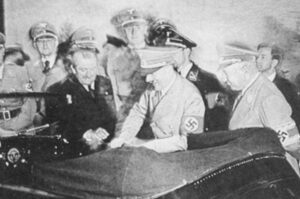 When Was the First Volkswagen Made?

Ferdinand Porsche presented his VW prototype at the 1937 Berlin Auto Show. Hitler then provided 200 Reichsmarks for the mass production of VW Beetles. He established a Volkswagen factory in Wolfsburg in Lower Saxony. 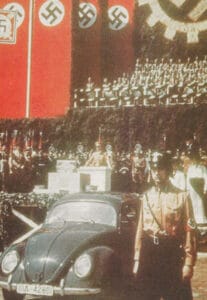 In May 1938, Volkswagen and the Nazis unveiled three VW Beetles, a convertible, a standard coupe, and a coupe that came with a sunroof. Because Hitler wanted the car to be highly affordable and simple, Volkswagen equipped the Beetle with a flat-four air-cooled 25 hp 995 cc engine.

Volkswagen produced only 210 Beetles before having to redirect its attention to wartime efforts as World War II began. During World War II, Volkswagen was only able to create a few Beetles for Nazi elites. 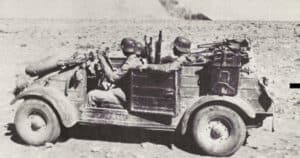 In 1947, Volkswagen transitioned from producing military Beetles to producing civilian Beetles. The company produced around 9,000 civilian cars in 1947 and nearly 20,000 in 1948.

Heinz Nordhoff became the director of Volkswagen in 1949, and under his leadership, the company greatly increased its mass production of Beetles. By 1955, Volkswagen produced its one-millionth car.

From there, the Volkswagen Beetle became an international hit, and Volkwagen produced over 21 million Type 1 Beetles by 2002.

By 2003, the annual production of the original Beetle decreased to only 30,000 models. That year, Volkswagen announced that they planned to halt production because there was no longer a significant demand. Volkswagen produced their final original Beetles in their North American plant in Puebla, Mexico, on July 30, 2003.

Get Premium Insurance on Your Classic Beetle

If you’re looking for great insurance on a VW Beetle or another classic car, look no further than Classic Auto Insurance! We offer customizable policies that are perfect for the unique needs of our clients and their breathtaking cars. Call us today at 888-901-1338, or get an instant quote here.