What do a Volkswagen Beetle and a Porsche have in common? No, this isn’t the start of a collector car joke, rather a fact that few people realize. These two iconic cars were created by one legendary man, Ferdinand Porsche. Besides founding the company that created some of the world’s best sports cars, he designed and built history’s most recognized car design- the Volkswagen Beetle.

For over 50 years, Porsche has been synonymous with classic sports cars. We’ve put together a timeline of the company’s awesomeness for you – feel free to share.

My Name is Porsche

Ever wonder if you are pronouncing the name correctly? In German, the final “e” of words is not silent. Even in English, the name is pronounced “Porsch-uh” rather than “Porsh”. Here’s an audio clip to help you get it right. 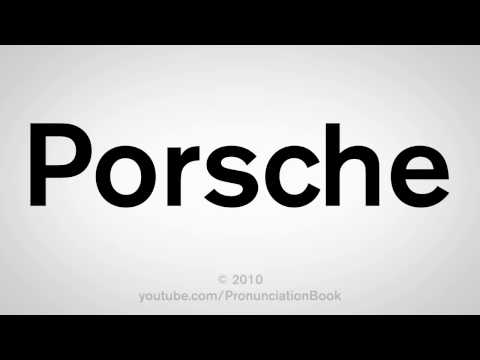 From Tanks to Sports Cars – The Evolution of Porsche

Although Ferdinand Porsche starts his car company in 1931, he produces tanks and military transports for the German war effort, which lands him in jail for war crimes. Before his jail time, Ferdinand also designs a car for the German people at the request of Adolf Hitler. The Type 1 becomes known as the Volkswagen Beetle – which means “a people’s car” in German. After his incarceration his son, Ferry, succeeds him and soon sets about redefining the company.

Ferry wants to manufacture sports cars but parts are hard to come by after the war. His first concept car is the Type 64, which repurposes Volkswagen parts. This model is never mass produced and only 52 still exist today.

Let’s Put the Engine in the Rear

Porsche takes what they learn from the Type 64 and the VW Beetle and in 1948, builds their first production sports car, the 356. Its innovative rear engine design would lay the groundwork for future models like the 911, still a top seller. The 911 debuts in 1964 and is considered by many to be one of the best sports cars ever. Porsche has stayed true to its original design though they briefly consider ending production in 1980. American CEO and 911 enthusiast Pete Schultz has other plans, which keeps the 911the company’s most successful model.

Cocktail Napkins are for Doodling

In 1953, while waiting to have lunch with an American importer, Ferry Porsche draws what becomes the company’s logo on a cocktail napkin. He chooses the coat of arms of the Free People’s State of WÃ¼rttemberg. The prancing horse is the symbol for the city of Stuttgart, where Porsche is based.

Porsche cars have won more races than any other race cars. Ever. Porsche has over 24,000 race wins to date. From the very beginning Porsche has vetted its cars on the track. The 550 Spyder and the 911 have competed and are winners. In 2015, a 919 Hybrid wins Porsche’s seventh 24 Hours of LeMans endurance race after completing 3,300 miles, 395 laps and using 500 gallons of fuel. It clocks a top speed of 211 mph.

Porsche Brand Expands Around the World

Today the Porsche brand is found on everything from designer watches and luggage to motorcycle engines and sports cars. It is clear that the name and reputation of this classic sports car company continues to stand strong around the world.

Porsches have long been a favorite among car collectors. Whether you own a 911 Carrera or a 356, you know that protecting it is a top priority. Let the friendly staff at Classic Auto Insurance help you find the right insurance policy for your needs. Visit our website at www.classicins.com and see how we can help safeguard your dream car.