Admit it, you’ve often wondered what it would be like to live the “glamourous life” of a celebrity. Fame, fortune and all those fabulous cars. If the world is your oyster, where you can curate a celebrity-style car collection, what kind of rides would you put together?

Celebrities Love Their Cars Too

Celebrity collectors are a varied as the cars they collect. Well known celebrities like rapper 50 Cent, boxing superstar Floyd Mayweather, actor Patrick Dempsey and fashion designer Ralph Lauren express their love of cars through their collections. Just like you, they collect cars they remember from their childhood or have obsessed over for years. 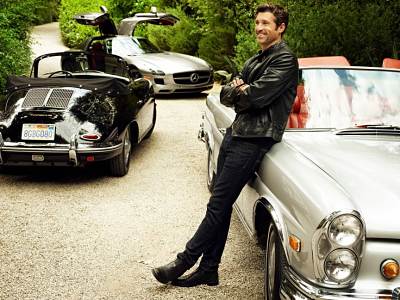 One of the largest collections has to belong to Jay Leno. With over 100 cars ranging from a 1906 Stanley Steamer Cup Racer to a Jaguar CX75, Jay has collected whatever car peaked his interest. His collection is so vast he is rumored to house it in an old airplane hangar at a California airport. He showcases many of his vehicles on his CNBC show, Jay Leno’s Garage. Collecting for Jay is about his love for all things automotive. Take a lesson from Mr. Leno, collect what you love. 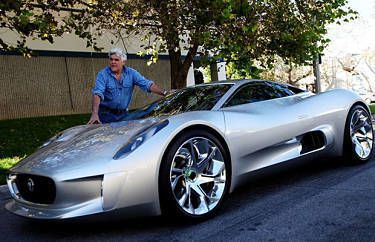 Ralph Lauren Collection One of the World’s Best

The Ralph Lauren Classic Car Collection, considered by many to be one of the top ten best in the world, includes some of the rarest and most expensive cars around. For designer Ralph Lauren, his cars are meant to be driven. “I’ve always seen cars as art – moving art,” he tells Vanity Fair. “In the end you can enjoy the beauty of the machine and the journey it takes you on.” Like his clothing, Mr. Lauren’s cars possess classic, sleek lines. The beautiful $40 million 1938 Bugatti 57S(C) Atlantic (one of only two remaining in the world) won the Best of Show at the 2013 Concorso d’Eleganza Villa d’Este. This car would be at home on any runway in the world. 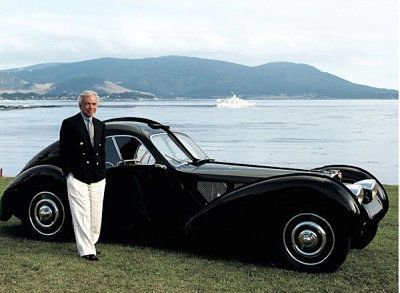 “Nothing” Compares to Seinfeld’s Porsche Collection

If you want to build your collection around one make of car then Jerry Seinfeld’s Porsche collection should be your guidebook. Considered one of the largest (and best) in the world, it includes a rare Porsche 959 and a 1955 550 Spyder. Jerry doesn’t just love Porsches, he loves all kinds of cars, which is why he built a state-of-the-art $1.4 million subterranean garage in a quiet upper west side street of New York. (Jerry’s 2nd lesson for us – if you love them, protect them). You can see many of Jerry’s cars on his web series Comedians in Cars Getting Coffee. 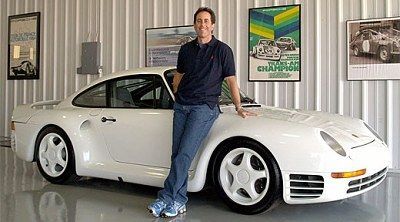 In building your mega collection, ask yourself – do I want to be hands-on with the restoration? If so, then former WWE wrestler Bill Goldberg is who you want to emulate. His collection is an homage to the great America muscle car, many of which he restored. From his 1968 Plymouth GTX Convertible to his 1965 Shelby Cobra Replica, Bill’s cars are like the man – powerful and no nonsense. 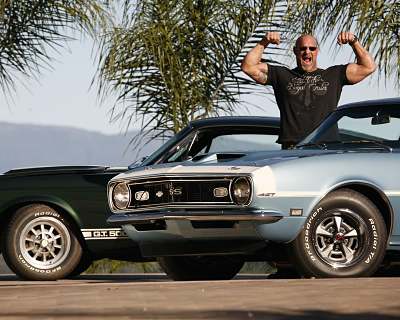 For many collectors, their cars are reminders of where they came from. This is true for actor/comedian Tim Allen whose collection reflects his love for his home town of Detroit. Tim has an eclectic mix of vehicles in his garage with a Porsche Carrera and a VW Karmann Ghia sitting alongside American classics like a 1962 Chevy 409 Bel Air. He also has the 1946 Ford Convertible, which was one of two cars built on the set of his show, Home Improvement.

Buy What You Love. Repeat.

Whether you have one car in your (soon to be expanding) collection or many is not the point. The only thing that matters is your love of cars. If looking at them, being around them or working on them makes you happy, then you have more in common with celebrity collectors than you think. So don’t begrudge your favorite celeb a few Porsches. For any car enthusiast, collecting cars is like eating potato chips – you can never have just one.

Car collecting is a passion. Protect your cars with customizable insurance coverage. Let our friendly staff at Classic Auto Insurance help you find the right policy for your needs. Visit our website at www.classicins.com and see how we can help safeguard your dream car.