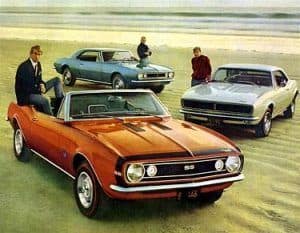 In 1967 Chevrolet releases a car they hope will hunt down the very popular Ford Mustang and eliminate it from a car lover’s must-have list. The Camaro is born, triggering a decades long rivalry. After a brief lapse in production, Chevy brings the iconic car back and is now ushering in the release of the 2016 Camaro. We think it’s the perfect time to test your knowledge, so we’ve assembled 28 thing you probably didn’t know about Chevy’s first Muscle Car. Group quiz, everyone! Share it with your friends.

Under the code name Panther, Chevy works furiously to produce a sports car that could challenge the sales juggernaut of the Ford Mustang. Chevy executive Pete Estes dislikes the designation, changing it to Camaro, which his marketing team proclaims a “small vicious animal that eats Mustangs”.

The Camaro is an immediate hit, selling 220,906 units in just the first year. The first generation offers coupe and convertible models with a variety of V6 and V8 engine options. The Mustang finally has some competition.

While the popularity of the sports coupe flourishes, sales for the Camaro convertible are lackluster at best. Chevy ends its production in 1969 but fans of the open-top muscle car convince the car maker to bring it back in 1984.

The second generation Super Hugger Camaros are lower and wider than their predecessors yet just as powerful. While only 9,000 are produced, the 1970 Z28 (with the Corvette LT-1 V8 engine) is considered by many to be the best Z28 ever built. Eventually, government regulations bring an end to the big block engine muscle cars.

The 70’s and 80’s are a period of adjustment for the car industry. Safety and fuel efficiency mandates lead to questionable engine designs. Nicknamed the Iron Duke, the 2.5L 4-cylinder engine in the third generation 1982 Camaros is anemic at best, eking out only 90 horsepower (sad for a muscle car) while ironically (pun intended) improving gas mileage!

Dominating at the Race Track

The Camaro is built to dominate at the race track. Bill “Grumpy” Jenkins helps establish the car’s racing reputation by winning in the inaugural NHRA Pro Stock class at the 1970 Winternationals and Gatornationals behind the wheel of a ‘69 Camaro. The car also has numerous successes in the NASCAR Nationwide/ Xfinity series.

The IROC-Z is Born

In the 70’s and 80’s, the Camaro is the featured stock car for the IROC Racing Series (International Race of Champions). IROC invites drivers from different racing principles to compete against each other in a test of driving skill. The popularity of the racing series prompts Chevy to issue a special edition IROC-Z Camaro in 1985.

A Camaro has been the pace car at the Indy 500 eight times beginning in 1967. In 1969 Chevy creates a limited production run of the convertible Camaro pace car featuring Hugger Orange stripes and interior. With only 3,675 produced, these cars are a rare addition to any car collection.

Despite its ongoing popularity on and off the track, sales for the Camaro begin to decline in the 90’s. After 35 years of continuous production, Chevy stops building the aging muscle car in 2002. It would take a Hollywood blockbuster to resurrect the iconic car.

In 2007 no one would have thought a sci-fi movie about an alien robot taking the form of a beat up ‘69 Camaro (and later transforming into a sleek new 5th generation model) could save a muscle car from extinction, but it does. Transformers the movie re-ignites our passion for the Camaro a full two years before it becomes available in showrooms.

Movie magic boosts sales of the new 5th generation Camaro to over 500,000 cars in the first four years, helping it to finally outpace the Ford Mustang. Chevy produces a “Transformer” edition Camaro to meet the demand of the movie and its sequels.

The 2016 (6th generation) Camaro is Motor Trend Magazine’s Car of the Year and is already setting hearts aflutter. The latest version of this muscle car is built on the Alpha platform used in the Cadillac ATS and CTS, giving it the solid ride of a luxury car while keeping the power of a muscle car.

You own the original muscle car, a Chevy Camaro. It’s your pride and joy so protect it with the right insurance coverage. Let the friendly staff at Classic Auto Insurance help you find the right insurance policy for your needs. Visit our website at www.classicins.com and see how we can help safeguard your dream car.