[Video] Custom-Built with a Modern Touch for that Authentic Feel 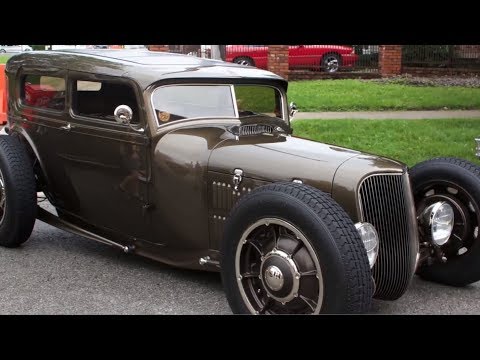 Custom auto builder Rad Rides by Troy enjoys sharing great cars from their shop with all the collector and classic car enthusiasts who fill the streets of Carmel Artomobilia, and they’ve been exhibiting here for more than two years. Fans may remember the Camel Toe Racing Blowfish at Artomobilia 2017 that can exceed a heart-stopping 320 miles per hour (phew!). Artomobilia’s John Pitz talks with Brian from Rad Rides about two more spectacular vehicles that make it to Artomobilia 2018, a 1941 Oldsmobile and a 1929 Model A Roadster.

Sweet ole’ Agnes is an Oldsmobile that rolls off the assembly line in 1941- the year World War II begins. Now, she is custom-restored with a new modern suspension comparable to a Corvette. Pop her hood and you’ll need a moment to take it all in. Agnes appears to have an authentic Oldsmobile engine with a fuel bowl and the old-type carburetor. “It’s confused Oldsmobile experts, it looks that original,” John says, “but it’s actually an LS3 underneath.” Agnes’ gussied-up engine is 100% new, with hidden fuel injectors that hide the modern power so the engine looks like it should be installed in the car. Sweet, indeed. The owner loves driving Agnes all around the United States. She already has 20,000 miles on her and counting.

Roadster with an Accomplished Past

Mark and Dennis Mariani’s 1929 Model A Roadster recently won several major industry awards, including the Goodguys 2018 Classic Instruments Street Rod of the Year. “It’s won just about every contest it’s entered,” Brian says, and for good reason. It’s spectacular. It gleams like a fresh 1929 model, from its paint to the tiniest piece of custom hardware. It rides low and sleek, just like a Roadster should – smooth drivability built right in. It gives an incredibly comfortable ride, too. The goal with this car is to maintain the beauty, functionality and simplicity of the original. The California brother-owners have already driven it 22,000 miles and are preparing for a cross-country voyage. Keep an eye out for it on America’s highways.

One of the most well-known names in the business, Rad Rides by Troy custom-builds automobiles for top collectors in America. The 18-year-old family business takes inspiration from grandpa’s motto, "There's only one way to do things – the right way. Troy Trepanier, the company’s namesake, also works on promotional vehicles for the likes of GM, Ford, Chrysler and Toyota. His motto is “nothing is impossible” and his expert team of fabricators, mechanics, painters and machinists work with the industry’s leading suppliers to create truly exceptional rad rides.

If you love custom hot rods, you know the importance of protecting a valuable investment with specialty insurance. Let us customize a policy to fit your needs. We offer affordable, Agreed Value coverage for a variety of collector, classic and custom vehicles. Our friendly, knowledgeable staff can answer your questions and give you a quote on the spot. Call 888-901-1338 or get an instant quote online and see how we can help safeguard your dream car.