In 1971, Plymouth released one of the most impressive and precious pony cars in history: the 1971 Cuda convertible. This remarkable vehicle was part of the third-generation production of the Barracuda, which was technically the first pony car ever released.

Although the vehicle wasn’t as popular as other muscle cars during its time, the car is now a hot collector’s item amongst motorheads.

The time in which Plymouth produced this stunning car was brief, but the Cuda still left an important mark on car history.

History of the Plymouth Barracuda

Plymouth released its first iteration of the Barracuda on April 1, 1964. Although the company technically released the car before the Ford Mustang — Ford released their pony car only two weeks after Plymouth Barracuda — the car was a direct response to Ford’s plans to unveil its groundbreaking new vehicle.

Although Plymouth didn’t know the exact specifics of Ford’s new car, they and other major American car developers were aware that Ford was planning to unveil a sporty compact car with running gear that was based on the Ford Falcon’s chassis.

Chrysler wanted in on the exciting new sporty-compact car market, so they got to work creating a compact pony car. With the first generation Barracuda, Plymouth essentially created a fastback version of the Plymouth Valiant, a compact car that debuted in 1959 and sported Chrysler’s A-body. Initially, Plymouth executives wanted to call the Mustang competitor the “Panda,” but this decision wasn’t popular among the Barracuda’s developers. Fortunately, they instead went with “Barracuda,” a name suggested by Chrysler designer John Samsem.

The first generation Barracuda based a number of its details from the Plymouth Valiant, including its 106-inch wheelbase, hood, vent windows, doors, A-pillar, bumpers, headlamps bezels, windshield, and quarter panels.

The car’s powertrain also resembled that of the Valiant, with its slant-6 six-cylinder engine. First-generation buyers had the option between the 170 cu in with 101 bhp and the 225 cu in with a power output of 145 bhp. Additionally, buyers could purchase a Barracuda with Chrysler’s new 273 cu in LA V8 engine, which had a two-barrel carburetor and produced 180 bhp.

Although the Barracuda was a brand-new car, it was no secret that it was basically a fastback version of the Plymouth Valiant. It was slower and less expensive than Ford’s Mustang, but Ford’s historic pony car far exceeded the Barracuda in popularity. In 1964, Plymouth sold 23,443 Barracudas while Ford sold 126,538 Mustangs. 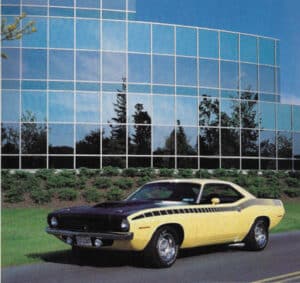 The Third Generation Barracuda and the 1971 Hemi Cuda Convertible

After releasing the first-generation Barracuda, Plymouth got to work with its second-generation iteration. Designers John Herlitz and John Semsen made several changes to the vehicle — including updates to the front and rear ends and the inclusion of Coke-bottle side contours — but the car still shared many similarities with the Plymouth Valiant. This was the first Barracuda to come with the convertible option.

Three years after the second generation’s debut, Plymouth unveiled its remarkable third-generation Barracuda. Unlike previous iterations, the new Barracuda didn’t feature any of the Valiant’s details. Plymouth scrapped the original Barracuda design and introduced an E-body. Additionally, Plymouth removed the fastback option and instead focused on the coupe and convertible options.

The Chrysler subsidiary offered three different versions of its Barracuda: the base Barracuda, the Gran Coupe, and the Cuda. The 1971 Cuda Convertible sported many impressive style details, including quad headlights, a new front grille, new taillights, and trim updates.

The impressive vehicle came with several powertrain options, but its standard engine was the 383 cu in B V8 with 335 hp. Some additional options included the 340 cu in LA V8 engine with 290 hp, the four-barrel 440 cu in RB V8 with 375 hp, and the triple-two barrel 440 cu in with 390 hp. Finally, the car was able to offer the impressive Hemi option thanks to the E-body’s large engine bay. A few lucky drivers obtained the 1971 Hemi Cuda convertible with a 426 cu in Hemi engine that boasted 425 hp.

Sadly, the stunning third-generation Barracuda’s life span was short. After the 1973 energy crisis and the emergence of new energy regulations, Plymouth had to scrap the vehicle entirely, marking the end of this breathtaking pony car. 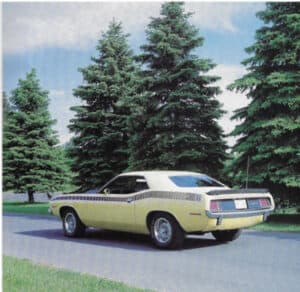 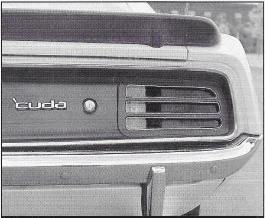 Get Premium Insurance on a 1971 Plymouth Cuda Convertible

If you’re looking for exceptional and affordable insurance on a classic Barracuda, such as the 1971 Plymouth Cuda convertible, you’re in the right place. Here at Classic Auto Insurance, we offer customizable policies that fulfill the unique needs of our clients and their stunning classic cars.

Our policies include agreed-upon value rather than stated value, meaning that we’ll work with you to determine your car’s value, and we also offer flexible plans, rollover miles, inflation guard, nationwide flatbed towing, and more.

To learn more about how Classic Auto Insurance can keep your classic muscle car on the road for years to come, call us at 888-901-1338, or you can get an instant quote here.