1960s Camaros: The Early Days of the Camaro

Home » 1960s Camaros: The Early Days of the Camaro

The first-generation Chevrolet Camaro is a force to be reckoned with. With its powerful 6-cylinder and V8 engine options, this classic Camaro quickly made a name for itself both on the race track and public roads. Today, this breathtaking classic car is a hot collector’s item amongst motor enthusiasts, but back in the 1960s, it was merely a vehicle produced to compete with the Ford Mustang. Here’s a brief history of the 1960s Camaro and why people adore this classic beauty. 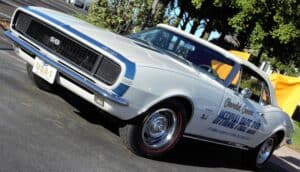 In April 1964, the Ford Mustang came on the scene and introduced the American public to an impressive new type of powerhouse vehicle: the pony car. Technically, the Plymouth Barracuda was the first pony car available to the American public, but Ford released the Mustang two weeks later and trounced the sales of the Barracuda. In addition to dominating the American car market, the Mustang also obliterated its competition on the race track.

In addition to the Chevy II Nova, Chevrolet got to work on a new pony car that would solidify its legacy separate from that of the Mustang — the Chevrolet Camaro. At the time, the car used the development name “Panther,” and General Motors even continued making announcements about the Panther up until the middle of 1966.

Soon after, Chevrolet decided to instead dub their new pony car the Camaro, in keeping with the tradition of titling their cars with words that begin with the letter “C,” such as the Chevy II, Chevelle, Corvair, and Corvette.

Fans of Chevrolet’s cars waited in eager anticipation for the new pony Chevrolet, and after two and a half years of waiting, the Chevrolet Camaro certainly didn’t disappoint. Chevrolet released the first-generation Camaro in the fall of 1966, and although the vehicle didn’t sell nearly as well as the Ford Mustang, it was immediately adored by motorheads.

In January of 1968, MotorTrend magazine even declared that “The wait was worth it. The smooth, flowing lines and classic simplicity of the Camaro reflected, from every angle, consummate years of continental styling innovations.”

The 1967-1968 Chevrolet Camaro Body and Specifications

The 1967 Camaro came with two body style options — the four-passenger convertible and the two-door coupe, which could also seat four. The vehicle’s length was 184.7 inches while the wheelbase was 108 inches.

Chevrolet offered various options and packages for their stunning new vehicle, including the RS appearance package. This included hidden headlights, an RS badge, a bright trim on its exterior, and different taillights with backup lights.

One feature that distinguished the first-generation Camaro from other pony cars was its incredibly impressive handling. With its low-profile and wide-stance chassis, the vehicle offered motorists exceptional handling on the road.

Along with its desirable SS and RS packages, Chevrolet also offered the Z/28 performance package option. Chevy designed this powerhouse option for the Sports Car Club of America Trans-Am Series to compete with the Ford Mustang. Chevrolet accomplished this goal and won the 1968 and 1969 Trans Am Series, beating the Ford Mustang and other competitors.

This impressive package came with a solid-lifter 302 cubic in V8 engine with a 4-speed transmission, power disc brakes, and eye-catching stripes down its trunk lid and hood.

The 1968 Chevrolet Camaro by and large remained the same, with the only major distinction being a new grille pattern design and a new ventilation system called the “Astro.” That year, Chevrolet also unveiled additional impressive engine options, including the 396 cubic in displacement V8 with 325 horsepower. The car could also come with either a 4-speed manual transmission or the Turbo Hydra-Matic.

Changes to the 1969 Chevrolet Camaro

It’s standard practice for automotive manufacturers to use the same body design for at least the first three years of a car’s debut because it saves on design and tooling costs, so unsurprisingly, the 1969 Camaro remained mostly unchanged, but it did feature certain tweaks and different engine options.

Chevrolet redesigned the front of the car near the grille and gravel, resulting in the vehicle’s length increasing from 184.7 inches to 186 inches. They moved the Camaro’s parking light to the gravel shield, and they increased the length of the car’s tail lights.

The many new options along with existing packages and specification choices made the first-generation Camaro highly customizable, making them all the more appealing. In the first three years, Chevrolet sold almost 700,000 units, many of which are still available on collector and classic car markets. 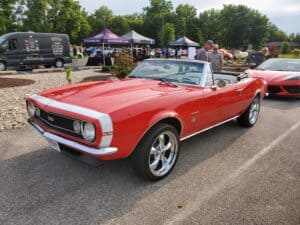 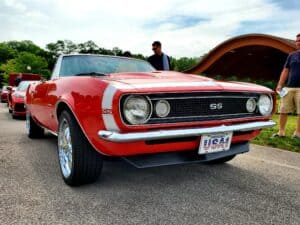 Get the Best Insurance for a Chevrolet Camaro

If you need insurance on a classic Chevrolet Camaro, you’re in the right place! We offer robust and affordable coverage that’s tailored to the unique needs of our clients and their remarkable vehicles.

As a Camaro enthusiast, Classic Auto is the ideal choice for your muscle car insurance coverage. With nationwide flatbed towing, rollover miles, agreed-upon value, and more, your classic car is in the best hands. You can learn all about our insurance offerings at 888-901-1338, or you can get an instant quote here!