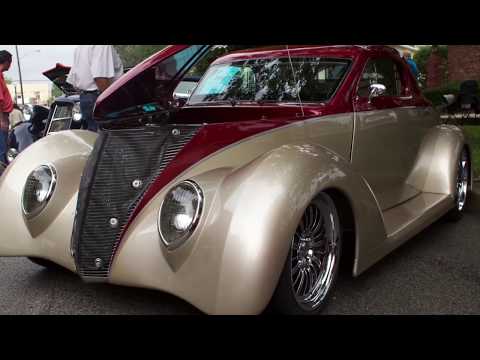 Anyone who sees this car typically stops dead in their tracks. It’s a stunner, and it instantly makes you wonder, “What is it, exactly?” She’s a replica of a 1937 Chevy Coupe, and an unusual one at that. The owner, Steve, finds this bronzy-gold and maroon beauty on Ebay at the suggestion of a friend, and just has to own her. “It was a trailer queen,” he says. “It had 933 miles on it when I bought it.” Steve makes a deal to buy both the queen and her custom trailer from the seller in Paso Robles, California, and brings her home to the Midwest.

What is a Replica Car?

Replica cars are recreations of popular production cars designed to look like the original. Often available as kits or component cars that come in parts, replicas use fiberglass shells that mimic the auto design of a model year or decade to recreate the iconic appearance as closely as possible. Some call them outright fakes, yet the replicas of today are made with such a professional touch, they look fabulous while offering the owner the same performance as the cars they’re modeled after, or better.

Gazing straight at Steve’s attention-grabbing replica, you can really appreciate the curves of her beautiful butterfly-shaped front end. The overall body shape evokes the sleek, crouched design of a classic Corvette and the timeless elegance of a 30’s era Chevy Coupe. She has what could be called the perfect hot rod stance, low to the ground and bursting with power under her hood. She has an LT1 Chevy engine with a 4L60 transmission, four-wheel disc brakes and a Corvette bootie (i.e., rear end). Her interior is crisp maroon and cream, with retro striping and raised detail work. Steve explains she honors the spirit of the original vehicle but exists as a totally unique car in her own right. This replica is all about passion and drivability, and Steve is looking forward to spending more time at her wheel.

Allure of the Replica

Some say replicas are just kit cars for people who can’t afford the real thing. Others say replicas give you nearly everything the originals can, for a fraction of the cost. How do you feel when you hit a pothole with a car that’s utterly priceless? Is she locked up in your garage as a result? Want to drive an iconic classic car, a dreamy race car or ultra-modern supercar without paying crazy money for it? Lots of replica brands add comfort features like air conditioning, navigation, heated seats, audio systems and more that you will not find in the original. You can’t forget about built-in modern performance, either. As they say in the biz, replicas are an option for car enthusiasts.

No Radio? No Problem.

Steve tells us the one thing his reformed trailer queen doesn’t have is a radio. That’s because he doesn’t need one. He loves just listening to the murmuring hum of her high-performance engine. “I’ve been loving cars since I was old enough to know what they were,” he says. For Steve, his ’37 Replica is for car lovers.

Thinking about investing in a replica or a classic car? Protect your valuable investment with specialty insurance. Let us customize a policy to fit your needs. We offer affordable, Agreed Value coverage for a variety of collector, classic and custom vehicles. Our friendly, knowledgeable staff can answer your questions and give you a quote on the spot. Call 888-901-1338 or get an instant quote online and see how we can help safeguard your dream car.